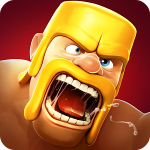 Download Clash of Clans v8.332.14 (773) APK for your Android Mobile, Tablet OR any Android device from AndroidFreeApks.com with direct link.

Clash of Clans is an epic combat strategy game. Build your village, train your troops and battle with millions of other players online! Forge a powerful Clan with other players and crush enemy clans in clan wars.

From rage-­filled Barbarians with glorious mustaches to pyromaniac wizards, raise your own army and lead your clan to victory! Build your village to fend off raiders, battle against millions of players worldwide, and forge a powerful clan with others to destroy enemy clans.